Article in Hills to Hawkesbury News – By Bev Jordan

You are here:
In The Press 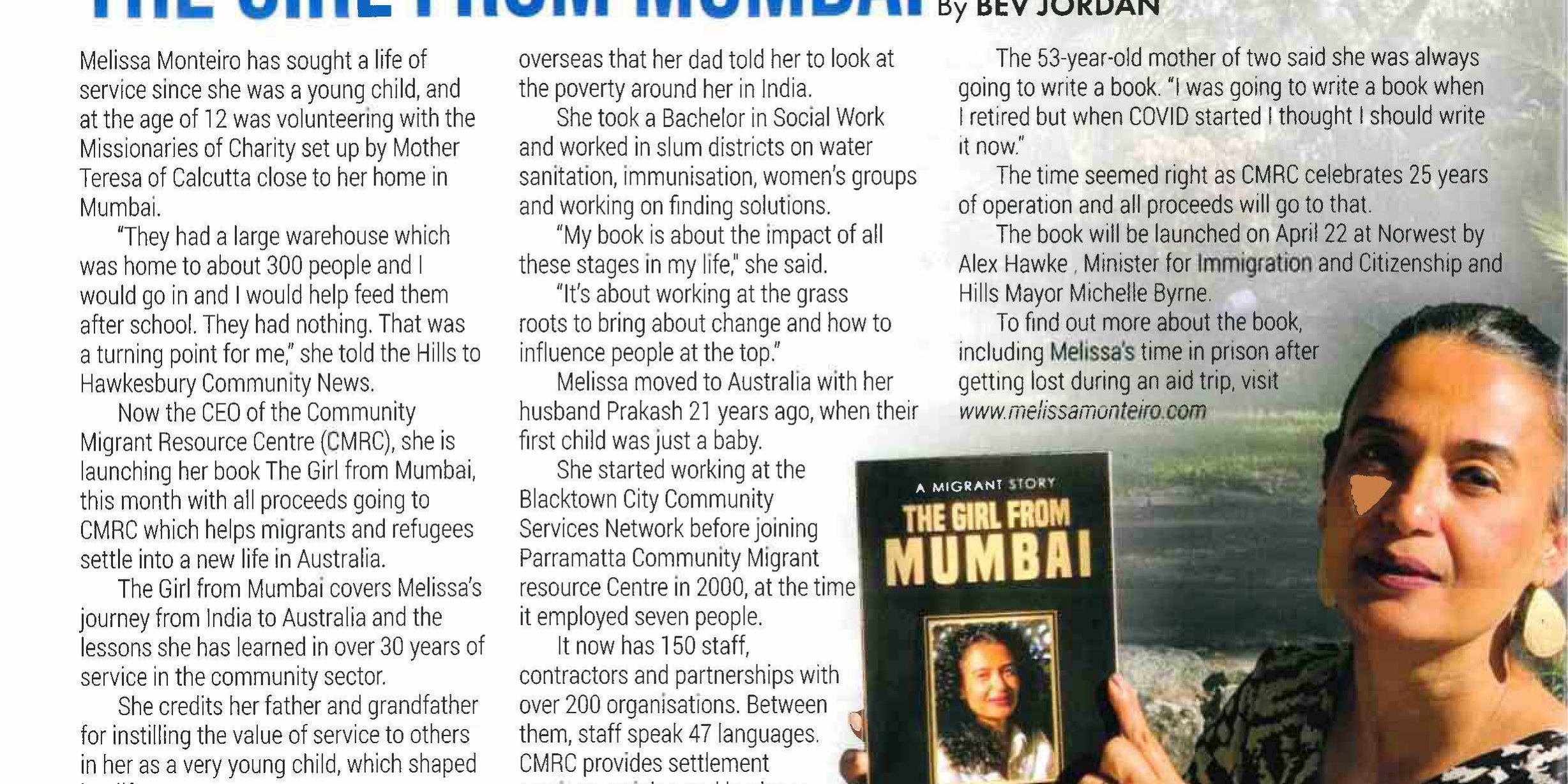 This article first appeared in the Hills to Hawkesbury News. Written by Bev Jordan.

Melissa Monteiro has sought a life of service since she was a young child, and at the age of 12 was volunteering with the Missionaries of Charity set up by Mother Teresa of Calcutta close to her home in Mumbai.

“They had a large warehouse which was home to about 300 people and I would go in and I would help feed them after school. They had nothing. That was a turning point for me,” she told the Hills to Hawkesbury Community News.

Now the CEO of Community Migrant Resource Centre (CMRC), she is launching her book The Girl From Mumbai, this month with all proceeds going to CMRC which helps migrants and refugees settle into a new life in Australia.

The Girl From Mumbai covers Melissa’s journey from India to Australia and the lessons she has learned in over 30 years of service in the community sector.

She credits her father and grandfather for instilling the value of service to others in her as a very young child, which shaped her life.

After 30 years in the Navy her father left and was Program Manager at a Catholic food relief agency for many years.

It was when a very young Melissa told him that she wanted to help the poor overseas that her dad told her to look at the poverty around her in India.

She took a Bachelor in Social Work and worked in slum districts on water sanitation, immunisation, women’s groups and working on finding solutions.

“My book is about the impact of all these stages in my life,” she said.

“It’s about working at the grass roots to bring about change and hot to influence people at the top.”

Melissa moved to Australia with her husband Prakash 21 years ago when their first child was just a baby.

She started working at the Blacktown City Community Services Network before joining Parramatta Community Migrant Resource Centre in 2000, at the time it employed seven people.

It now has 150 staff, contractors and partnerships with over 200 organisations. Between them, staff speak 47 languages. CMRC provides settlement services, training and business support to name a few of the programs it runs. The CMRC also runs a number of social support groups in the Hills from its office in the Hills Community Hub at Castle Towers.

The time seems right as CMRC celebrates 25 years of operation and all proceeds with go to that.

The book will be launched on April 22 at Norwest by Alex Hawke, Minister for Immication and Citizenship and Hills Mayor Michelle Byrne.

To find out more about the book, including Melissa’s time in prison after getting lost during an aid trip, visit melissamonteiro.com.

The Girl From Mumbai is now a Amazon #1 Best Seller
June 28, 2021
Melissa Monteiro launches The Girl from Mumbai – Spotlight with Jim Taggart and Darryn Capes
May 14, 2021

Journey of more than one destination – By Prescella Mabor
May 14, 2021